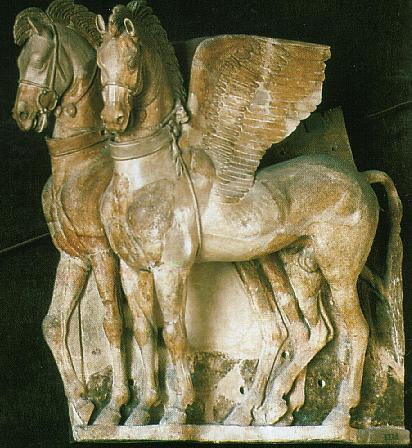 People often ask me the question: Why would anyone be interested in the ancient Etruscans? There is probably no good answer to that. Perhaps it is the magnificent artwork including fine gold jewellery with the intricate granulation style, or the magnificent bronzes such as the Arringatore or the Chimera of Arezzo, or perhaps it is the enigma of the origins of this people, and their language which was so unlike any other. We are only recently beginning to understand the words of the Ancient Etruscans little by little.

However above all, there is the fact that for too long the Etruscan civilisation has been totally ignored in studies of the ancient world. This is totally unjustified given what we now know about this remarkable people.

I am glad to see that the balance is being set right thanks to renewed interest in the Etruscans, and the teachings of a few dedicated academics.

I would like to quote directly an introduction by Professor Graziano Baccolini (reproduced by his kind permission) which I believe summarises quite eloquently the immense contribution made by the Etruscans to Western Society. The original Italian version can be found at:

Reflections on the Etruscan Civilization

" I can never succeed in understanding why Italians still fail to recognize the enormous contribution that the Etruscan civilization has made to our Western civilization. We keep on believing the teaching that the Greeks and above all the Romans are the peoples to whom the Western world owes its origins. All of this is considerably exaggerated and based on historical falsehoods. However, I have ascertained instead that it is the Etruscans, coming from the East, who are the true founders of our European culture, for both good and bad aspects. This truth continues to be understated and at times hindered by various Italian historians while it has been being recognized for numerous decades by the majority of the historians of the whole world. Etruscology is now a subject of enormous interest all over the world and a lot of falsehoods and commonly held beliefs are crumbling because they were used to discredit a people for appropriating of their worths. In the past centuries first the powerful and unculturated Rome h as falsified its own origins and has ignored the legacy of the defeated Etruscan civilization, then the first Christian emperors have completed the work with their edicts. Subsequently on the ruins of the empire, the Pontifices of the new religion appropriated many ancient insignias of the Orient handed down to the Romans from Etruscan leaders and priests. For example the purple of the Lucumones became the colour of the cardinal, the Etruscan priest's Littus became the Pastoral one of the Bishops. The solemn ceremonies of the new religion are a reproduction of the Etruscan religious ceremonies. The ancient former Etruscan cities became the first Episcopal centers (Volterra, Vulci, Orvieto, etc). The longest existing Etruscan text is a calendar containing 12 columns with the religious instructions for every day.

Also the figurative Christian patrimony retraces the images found again in the Etruscan tombs. The winged figures of the Etruscans return in the Christian figures of the angels and Satan. On top of the ancient Etruscan temples has been built the new churches which very probably still conceal in many things their walls. It is strange that Etruscologists have not considered this yet. Then first Rome, then above all the priestly hierarchy of the new Roman religion snatched the symbols of the Etruscan civilization but denied the so-called pagan origin of it all. As always happens rather in the history and in the life, slandering the legitimate owners and accusing them of various inequities. Unfortunately our culture has inherited the worse of the Etruscan religion as for example, the concept of infallibility, seconded by the Christian religion.

However as also happens at times in life, the truth is reborn. From accumulated evidence, one succeeds in gathering that the truth is quite different. The great civilizing inheritance of the Etruscans was for centuries abandoned, earths once rich with produce became uncultivated, shops of artisans and artists became empty, their advanced knowledge of metallurgy and of hydraulics was forgotten and Etruscan creative individuality was oppressed - fortunately not entirely. After centuries of cultural regression (I probabably suspect due to the new religious Imperium) of hiding and of destruction of the sources of the Etruscan civilization there came the rebirth. In the ancient suburbs of the Appennines there remained the descendants of the Etruscans and the wonder contained in the tombs of their ancestors woke up again their native genome: the central part of the ancient world earth of the Etruscans, Tuscany, became the cradle of the Humanism and of the Renaissance. In these cities, for long generations Etruscan, characters such as Dante Leonardo, Brunelleschi, Giotto, Bernini, Michelangelo etc were born, and above all so many unknown artisans and artists to which the growth of our Western civilization is owed.

Rereading these reflections I now understand, and perhaps you will also understand yourselves, because many Italian historians are reluctant to recognize these truths."

Close this window to return to "The Mysterious Etruscans"