Educational Resources Page
If you have any specific requests, suggestions or feedback, please click here.

"The Mysterious Etruscans" is an ongoing work (obsession?) devoted to the Etruscan Civilisation.

I myself have no formal qualifications in History, but I have drawn from sources, both modern and ancient in the development of the site.

I was first drawn to the Etruscan civilisation by their art, and also through reading Werner Keller's "The Etruscans" in the early 1980's. I was struck by the sense of injustice. If we pick up any popular book on Ancient History or Mythology, we find very few references to the Etruscans. It is as if they have been obliterated from memory in a sense, and some authors prefer almost to deny their existence.

A special acknowledgement to Suzanne Robison (MA) for checking through my site as it progresses, and pointing out any flaws. As I said previously, I have no formal qualifications on the subject, and must rely the voluntary assistance of others such as Suzanne to help to maintain the website as a useful educational resource. If there is anything which you feel is incorrect, or needs additional information, please help me by using the feedback form linked at the top of the page. The site is family friendly. Since I have tried to make the site as comprehensive as possible, there are inevitably small sections with more adult themes, and these are inobtrusive and have been password protected to maintain the "family friendly" rating of the site.

The Mysterious Etruscans- A Glossary

Acroteria: The name given to terracotta statues normally placed on the roof of a temple, also called high relief.

Alaric the Goth::Chief of the Visigoths from 395 and leader of the army that sacked Rome in August 410, symbolizing the fall of the Western Roman Empire. :

Apologists: 2nd and 3rd Century CE Christian writers, who attempted to provide a defense of Christianity and criticisms of Greco-Roman culture.

Aramaic:a Semitic language used since the ninth century BCE and still used by some isolated villages in modern Syria:

Arnobius: Christian Apologist who lived in North Africa during the reign of Diocletian. (284-305 CE)

Arretine Ware:A form of bright red polished pottery impressed with patterns ("terra sigillata") which originated in Arretium (modern Arezzo) but which spread throughout the Roman Empire.

Basilica: in this context, an oblong building ending in a semicircular apse used in ancient Rome for a court of justice or a place of public assembly.

Bucchero: an imitation in black burnished clay of metal vessels. The early and finest type was called bucchero sotile. This was replaced from the 6th Century BCE by bucchero pasante, a heavy, thick-walled ware, overly complex in form and ostentatiously decorated with reliefs. Heavy bucchero is the general term used for the thicker bucchero used for larger vessels.

Cardo : An imaginary line running East-West - at right angles to the decumanus (qv.)

Censorinus: Roman historian and philosopher of the 3rd Century CE.

Cuniculi or labyrinths: elaborate underground tunnels with a system of intricate passageways and blind alleys.

Decumanus : An imaginary line running North- South used in the Etruscan foundation rituals. Also the name given to a Road running North-South through the centre of a city.

Double flute:a wind instrument consisting of two flute like stems with a common mouthpiece. Characteristic instrument of the Etruscans.

Dodecapoli : Twelve cities - Alternative name for the Etruscan confederation or league of 12 cities.

Edifice:In this context the founding stone of a city. Usually a square section block with the four cardinal points inscribed. It had a ritual significance in the foundation of Etruscan cities.

Euboean:Pertaining to the Island of Euboea, in the Greek Archipelago

Fanum Voltumnae : Etruscan sacred grove at Volsinii where the leaders of the Etruscan league met annually.

Fasces:A double headed axe, symbol of absolute power, normally associated with the Lictor's rods, symbolising the power to either kill or punish offenders at will.

Fibula:A device used to fasten a robe or cloak, and made of bone, bronze, gold or other substance.

Gens:A Roman family of family name (Adj. Gentilial). The double name including the familiar and getilial name was first used by the Etruscans. :

Granulation: a type of jewellery decoration in which minute grains of gold are applied to a surface in patterns or massed to fill in parts of a decoration. The art of granulation probably reached its peak with the Etruscans between the 7th and 6th centuries BCE, in the elaborately granulated and embossed earrings and fibulae modeled with gold-granulated sphinxes and lions. The technique involves cutting tiny squares of gold and copper, placing them on the gold object and bringing the temperature up to the melting point of the gold/ copper alloy. The main object does not melt, but the granules adhere to the surface.

Indo European: a family of languages comprising those spoken in most of Europe and also in Persia, India and parts of Asia

Inhumation: burial of the intact corpse, used to contrast the practice of cremation.

Lauchum: or Lucomo in its Latinised form, Etruscan name for leader, king.

Liber Lintaeus:The linen book of Zagreb Museum which was used to wrap an Egyptian mummy of the Ptolomeic period. The script is in Etruscan and contains a Etruscan sacred text.:

Lictor:Assistant to the magistrate (qv.)

Lituus:a type of staff similar to the Shepherds crook used by Etruscan priests and later used by the Christian church.

Pantheon: the officially recognized deities of a people

Parchment: the skin of a sheep or goat prepared for writing on

Patina:A blue or green coating of corrosion found on metals such as bronze.

Pelasgian: (Pelasgi)-The name generally given to the Pre-Indo-European inhabitants of Greece. Also called the sea peoples they are first mentioned by Homer.

Phoenician: relating to ancient Phoenicia, which corresponds roughly to modern Lebanon. The Phoenicians were notable merchants, traders, and colonizers of the Mediterranean in the 1st millennium BC.

Pilasters: upright pillars, rectangular in plan and structurally a pier but architecturally treated as a column and that usually projects a third of its width or less from the wall.

Punic: relating to Carthage or the Carthaginians.

Raetian: relating to the Raetian tribe of Southern Germany. Although some scholars believe Raetic is intermediate between Celtic and Illyrian (a branch of the Indo-European language family spoken east of the Adriatic Sea), others now believe the language to be non-Indo-European. Late Raetian inscriptions, especially those from northern Italy, seem to have been influenced somewhat by Etruscan.

Regolini Galassi: The name given to the tomb of Larthia in Cerveteri excavated in 1836 by Regolini and Galassi.

Repouss�: A technique for producing relief ornamentation on bronzes by hammering from the inside of the vessel or item.

Samnite: a member of the ancient warlike tribes inhabiting the mountainous centre of southern Italy. These tribes, who spoke Oscan and were probably an offshoot of the Sabines, apparently referred to themselves not as Samnite but by the Oscan form of the word, which appears in Latin as Sabine

Semitic:a family of languages in the Afro-Asiatic family that includes Hebrew, Phoenician, Aramaic, Arabic, and Amharic

Situla:a type of bucket, often made of bronze

Sibylline books:sacred Roman books based on the prophesies of Sibyl. A famous collection of sibylline prophecies, the Sibylline Books, was traditionally offered for sale to Tarquinius Superbus, the last of the Etruscan kings of Rome, by the Cumaean sibyl. He refused to pay her price, so the sibyl burned six of the books before finally selling him the remaining three at the price she had originally asked for all nine. The books were thereafter kept in the temple of Jupiter on the Capitoline Hill, to be consulted only in emergencies. There are some parallels with traditions of the Vegonic books of the Etruscans.:

Tebenna: a semicircular mantle with a decorative collar- the early version of the Roman toga

tempera: a process of painting which uses egg yolk as a medium instead of oil or water

Thalassocracy: the name given to Etruscan control of the sea, (literally- sea control)

Thymaterium: censer: a vessel for burning incense burner swung on chains in a religious ritual, first used by the Etruscans

Triclinium: a type of couch which the Etruscans and Romans reclined on while eating

Tufa:a porous rock formed as a deposit from springs or streams

Tumulus:an artificial mound over a tomb.

Umbrian:Pertaining to Umbria- an ancient region of Italy.

Vegoia:(adj Vegonic) Prophetic nymph one of the Etruscan Lasa or nymphs. See Sibyl

Vellum: a fine-grained unsplit calfskin prepared as a writing surface

Via Salaria:(Literally the road of Salt) An important trade route running roughly North-South through Rome.

Votive dedication: something given to a deity

Wattle and daub:a method of construction in which mud was plastered over branches and sun dried.

Avele Feluske: Etruscan leader from Vetulonia, whose grave stele bears an image of a Fasces and Lictors rods

Mastarna (Macstarna): Etruscan name given to Servius Tullius although this may be an Etruscan (and original) form of the word magister.

Lars Porsenna: King of Clusium who invaded Rome after the overthrow of Tarquinius Superbus but did not restore him to power

Aulus Spurinna: Lucomo of Tarquinia during the 4th Century wars with Rome

Velthur Spurinna: Praetor of Tarquinia who provided aid to Athens during the during the Peloponnesian war with 3 fleets of pentecontors in the attempted siege of Syracuse

Thefarie Velianus :Community leader (tyrant?) of Caere who is mentioned on the Pyrgi tablets

Vulca of Veii: sculptor who decorated the Temple of Jupiter Capitolinus in Rome and possibly the Temple of Aplu (Apollo) at Veii ca. 510 B.C.E.

Krater: mixing bowl for water and wine or funerary offerings

East Greek:generic term for pottery produced in Ionia and nearby islands, such as the Wild Goat Style; animal friezes, often associated with Rhodes

Attic Black Figure: beginning late in the Orientalizing Period, it becomes the dominant style in the Archaic Period; technique from Corinth; figures are black within an incised contour line with unpainted clay firing red orange.

Attic red figure: vase painting technique which reverses the figure/ ground relationship: the figures skin is indicated by the reddish clay, linear details and outlines done with the brush; no incision, some added relief occasionally

Hellenistic:the period and prevailing artistic style from the death of Alexander the Great (323 BCE) to the conquest of Egypt by Rome (30 BCE)

Archaic Greek:the period of artistic development in Greece from about 650 to 480 BC, the date of the Persian sack of Athens. 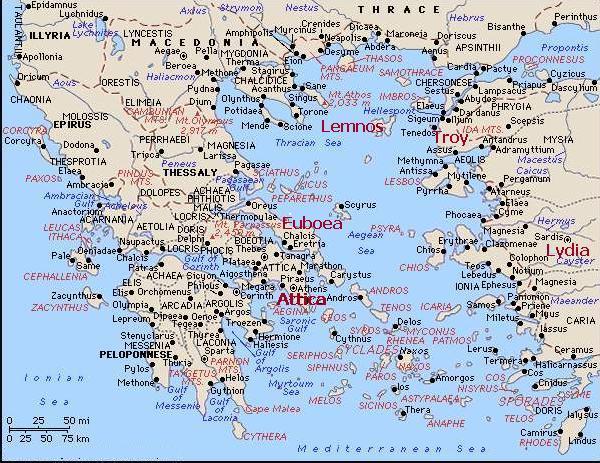 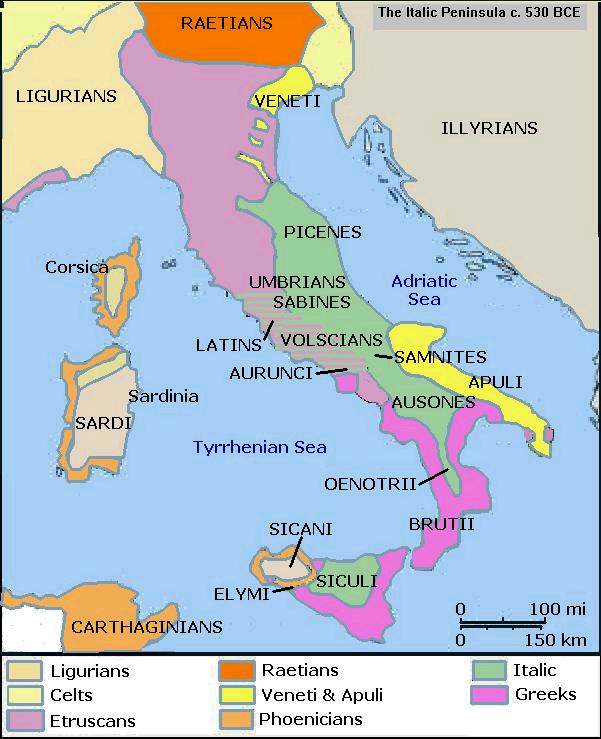 If you want to have a go at some Etruscan Word processing, try this Etruscan True Type Font. It is designed for PC's, but a Mac version can be provided on request. It comes as a zip file, and requires Winzip.

Compare and contrast the Apollo of Veii with the Mars of Todi. Discuss style, function, medium, and iconography.

Describe the Etruscan view of religion. Cite works as examples.

Describe Etruscan influences in art, architecture and Religious Iconography during the Renaissance.

Compare and contrast the origin mythologies of Rome and Etruria. Discuss the significance of any similarities.